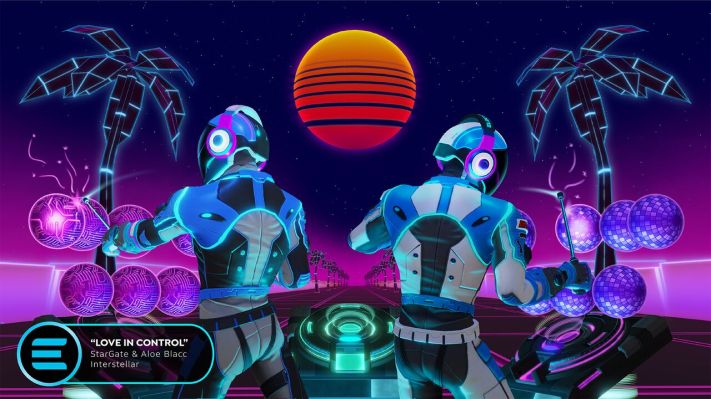 Virtual reality is an isolating experience. You power it up, strap the headset on and just sort of drift off into your own world. But maybe that doesn’t have to be the case. Maybe there’s a way to slip into a virtual world and still interact with your surroundings.

Electronauts presents an interesting example. Survios sees the title as a party game — something akin to what Guitar Hero/Rock Band was at the height of their collective powers, when people would set them up in their living room and invite friends over to play.

The new title has one decided advantage over those older games, however: It’s impossible to hit a wrong note. That’s kind of the whole point, in fact. Unlike the gamification of Guitar Hero/Rock Band, Electronauts is more experiential, designed to create remixes of songs on the fly.

I played a near final version of the title at a private demo in New York the other week, and mostly enjoyed the experience — my own personal hang-ups about doing VR in front of a room full of strangers aside. The experience has a very Daft Punk/Tron vibe to it as you operate a spaceship control while hurtling through psychedelic space.

There are several ways to interact with the basic track in the process, using the Vive or Oculus controller. The more complex tasks take some figuring out — I was lucky and happened to have the game’s creators in the room with me at the time. I suppose not everyone has that luxury, but the good news here is that the title is designed so that, regardless of what you do, you can’t really mess it up.

I can see how that might be tiresome for some. Again, there’s no scoring built into the title, so while it can be collaborative, you don’t actually compete against anyone. The idea is just to, well, make music. Hooked up to a big screen and a home theater speaker system, it’s easy to see how it could add an extra dimension to a home gathering, assuming, of course, the music selection is your cup of tea.

Can’t say I go in for most of those, but I can pick out a handful I wouldn’t mind sticking in rotation — Del the Funky Homosapien, DJ Shadow and the People Under the Stars, for instance. I wouldn’t be too surprised to see additional music packs arriving, as the company secures more licensing deals.

Meantime, Electronauts will be available on Steam for the Oculus Rift and HTC Vive, priced at $20. The PlayStation version will run $18. For those who want an even more public experience, it will be arriving in Survios’ 38 VR Arcade Network location.

Part 2: Key points from its S-1 filing and what to watch for Eric Peckham ...