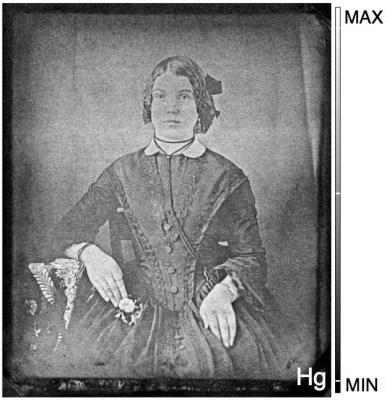 Daguerreotypes – photos made with a process that used mercury vapors on an iodine-sensitized silvered plate – break down quite easily. The result is a fogged plate that, more often that not, is completely ruined by time and mistreatment. However, researchers at Western University have created a system that uses synchrotrons and “rapid-scanning micro-X-ray fluorescence imaging” to scan the plates for eight hours. The system shot an X-ray 10×10 microns thick at “an energy most sensitive to mercury absorption.” This, in turn, showed the researchers where the mercury is most prevalent, thereby bringing up the image that was lost to damage or decay.

Kozachuk used r to analyze the plates, which are about 7.5 cm wide, and identified where mercury was distributed on the plates. With an X-ray beam as small as 10×10 microns (a human scalp hair averages 75 microns across) and at an energy most sensitive to mercury absorption, the scan of each daguerreotype took about eight hours. The team published their findings in Scientific Reports.

“It’s somewhat haunting because they are anonymous and yet it is striking at the same time,” said Madalena Kozachuk, a PhD student in Western’s Department of Chemistry. “The image is totally unexpected because you don’t see it on the plate at all. It’s hidden behind time. But then we see it and we can see such fine details: the eyes, the folds of the clothing, the detailed embroidered patterns of the table cloth.”

The technology promises to improve the methods of conservation for old photographs and should bring many previously unusable daguerreotypes back to life.

Previous CBS to stream NFL games on mobile
Next Oh, the things I would do to get this cardboard-style Nintendo Switch