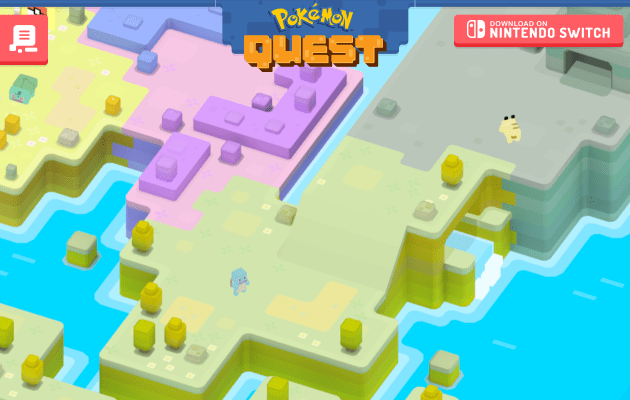 Coming just shy of a month after its original release on the Nintendo Switch, Pokémon Quest has hit the the App Store and Google Play Store today with an impressive response. According to analytics by Sensor Tower, the app on iPhone is already at No. 2 in Japan and No. 3 in Korea. While hovering at No. 5 in the U.S., the momentum looks like it could carry it to No. 1 by the end of the day.

The game itself is designed to be an easily accessible, free-to-play RPG that features your favorite pokémon from Pokémon Red and Pokémon Blue — with a geometric twist.

Taking a left-turn from their typical animation style, the pokémon in Quest have been transformed into cube versions of themselves and inhabit a brightly colored — also 90-degree angled — terrain called Tumblecube Island. After choosing a pokémon companion to begin your quest, trainers are tasked with exploring the island for hidden treasure.

But if Minecraft-ified Pokémon is not exactly your cup of tea, don’t worry, Nintendo has more up its sleeves.

In a joint announcement in Tokyo this May, Nintendo, the Pokémon Company (the group behind Quest) and Niantic (the creators of Pokémon GO) announced a plan to release four new Pokémon titles by 2019.

The companies plan to begin weaving these platforms, games and fans together, including allowing users to transport their pokémon from GO to the Switch titles and the creation of a “real” Poké Ball for the Switch.

It’s too early to speculate on the success of these grand plans, but it’s an exciting prospect for pokémon trainers worldwide.

Editor’s note: Get this free weekly recap of TechCrunch news that any startup can use by ...