Valve’s answer to Discord is now live for everyone 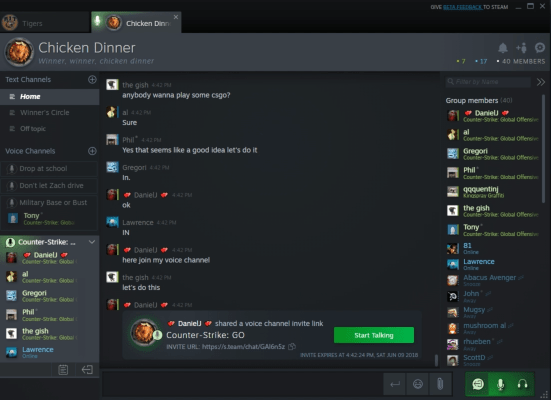 Just a month ago, Valve announced Steam Chat — an overhaul to its aging chat system, and the company’s answer to rapidly growing competition from apps like Discord. At the time, it was a beta limited only to those who were granted access.

Today it’s opening up to all.

As Devin put it when the beta features rolled out, the previous chat system “may as well be ICQ.” It was useful for a quick chats, but it felt much too limited for anything beyond that.

The new Steam Chat, meanwhile, takes a huge step toward being a modern chat offering. It groups contacts by the game they’re playing, shows whether or not they’re currently in-game or in a match, offers easy access to your “favorite” contacts and allows for big group chats and persistent channels. It supports inline media (GIFs! SoundCloud! YouTube!), encrypted voice chat and has both a browser-based client and a client built into Steam.

Will it kill Discord? Probably not.

While it might stymie the losses of the more casual players who might otherwise find their way over to Discord, it’ll be tough to sway anyone who has already come to call Discord home. Many Discord gaming groups have deep roots, with many of them having elaborate channel setups and relying on bespoke customizations like bots that help them schedule matches or raids.

If you want to check out the new chat system and already have Steam installed, just pop into Steam and tap the “Friends and Chat” button in the bottom right.

The flagship Xbox Series X is arriving on November 10, and will carry a retail ...